South Park is arguably one of the best (if not the best) animated series in the world. It’s always funny, has very likeable characters, and really good animation. Plus, for many of us, this show is a pleasant nostalgia trip since we grew up watching it.

If you wanted to start watching or re-watching the series, one question probably comes to mind – is it on Netflix?

Well, it is, but things are a bit complicated. We’ll tell you everything you need to know in this guide.

So Can You Watch South Park on Netflix?

You can, but only in a few countries. You can use StreamCatcher (an online tool that focuses on crawling and unlocking Netflix shows) to find out where they’re available. ProPrivacy made the tool, and it’s been pretty accurate so far (at least for us).

At the moment, it seems that you can only watch this animated series in the following countries: South Korea, France, the UK, Japan, Germany, the Netherlands, Italy, Spain, Australia, India, and Switzerland. 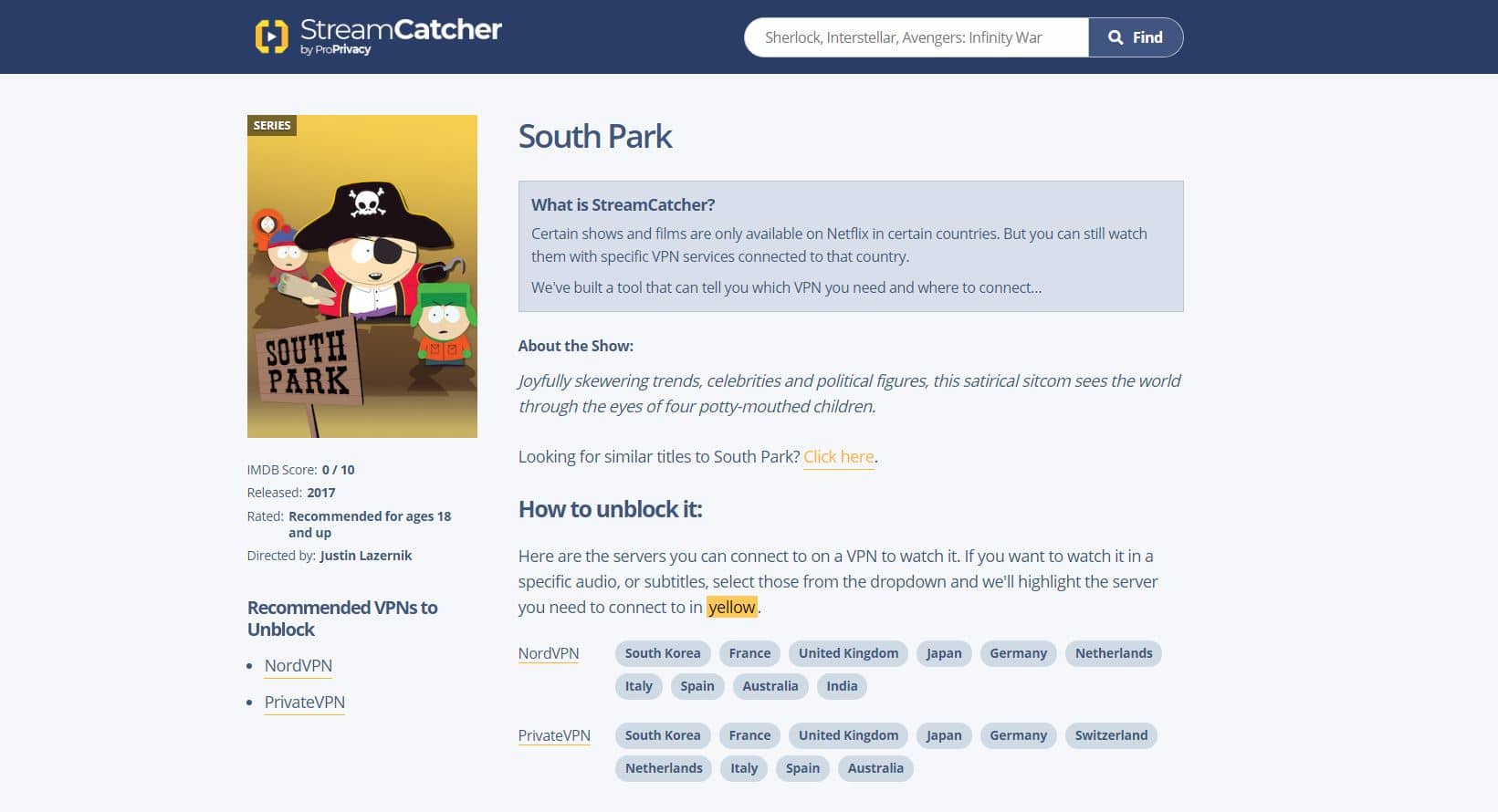 If you know other countries where you can watch South Park, please let us know in the comment section at the end of the article.

This isn’t the only catch, though. There’s another issue – Netflix doesn’t have all the seasons. It only has four of them. Well, five if you count their South Park Top Episodes as a season (it contains random episodes from different seasons).

Why Aren’t All Seasons on Netflix?

Or maybe Netflix wasn’t sure how well the show would perform. So they didn’t want to invest too much money from the start. Who knows, if it performs well, they might try to get the rest of the seasons on their platform too.

How to Unblock South Park on Netflix

If you use a VPN, you’ll be able to do this in no time! The service stops Netflix from seeing your real geo-location, meaning the site won’t be able to geo-restrict your access anymore.

To watch South Park, you’ll just have to use a server in a country like South Korea, France, or Germany (or anywhere else the series might be available). Connect to it before visiting Netflix, and the site will think you actually live in one of those countries.

If you’re not sure which VPN to use, you can safely try out ExpressVPN, NordVPN, or PrivateVPN. We tried all of them, and had no problems unblocking South Park.

We already said they let you unblock the show, but that’s not what we’re talking about here. The key to “binging” Netflix content is not dealing with bandwidth throttling. That’s when your ISP slows down your online speeds because you use too much data (which is obviously easy to do when you binge a show like South Park).

Well, if you watch the series with a VPN, that won’t be a problem anymore. The service encrypts your traffic to hide your web browsing. Basically, your ISP won’t know what you’re doing online. Also, they won’t see that you’re exchanging data with Netflix.

Due to that, they won’t be able to selectively lower your streaming speeds. Spending the whole weekend binging South Park without having to experience random slowdowns is now completely possible!

Where Can You Watch the Rest of the Seasons?

Many people will tell you to check out Amazon Prime Video because it has all the seasons. Just be sure to use a VPN since there’s a chance the content isn’t available worldwide there either.

However, we have a better alternative – the official South Park Studios site. You can watch all the episodes for free there. And as far as we know, you don’t need to use a VPN to unblock the site (unless your government, ISP, or network admin is blocking it).

So when you finish up all the seasons that are on Netflix, just head over to the official site and continue where you left off!

Can You Watch South Park: Bigger, Longer, and Uncut on Netflix?

Yes, the notorious movie is on Netflix. But again, you’ll need to use a VPN to watch it.

We used StreamCatcher again to find out where it’s available. It seems you can watch the movie, but only in France, Canada, Australia, and Switzerland for now.

So, just connect to a VPN server in any of those locations, and the movie should show up in your searches.

Can You Unblock South Park with a Free VPN?

It might be possible, but we don’t guarantee anything. Some of the top VPNs on the market offer a free version of their service which might be able to unblock Netflix. However, you will have to settle for lower speeds and (sometimes) capped bandwidth.

If you want to use random free VPNs off the app store, we can safely say they won’t work with Netflix. You’ll very likely get the proxy error while using them, actually.

Overall, it’s better to just use a paid VPN. Most of them have a no-questions-asked 30-day refund policy. So, you can safely buy a subscription and get your money back since you have plenty of time to decide if the VPN is worth it or not.

South Park is available on Netflix, but there are only four seasons on the platform (five with the list of top episodes from random seasons). If you want to watch them, you’ll need to use a VPN since the show isn’t available worldwide. Just make sure you don’t use a free VPN – it likely can’t unblock Netflix 24/7, and you’ll get slow speeds.

How to Read Someone’s Text Messages without Rooting The Targeted Device?

One Stop Solution to Get Free Fire Version on Pc With...

Vivek Attri - December 13, 2019
0
Mobile gaming in the foremost means of entertainment that can enhance your creativity and tactic skills. Most of us like to play video games...

Coke and Popcorn: A Destination of All Blockbuster Movies

How to Use Whatsapp Business on PC?

Every Business Needs These Smart Techniques For Instagram Followers

Using Acids In Your Skincare Routine

The most popular games in the world