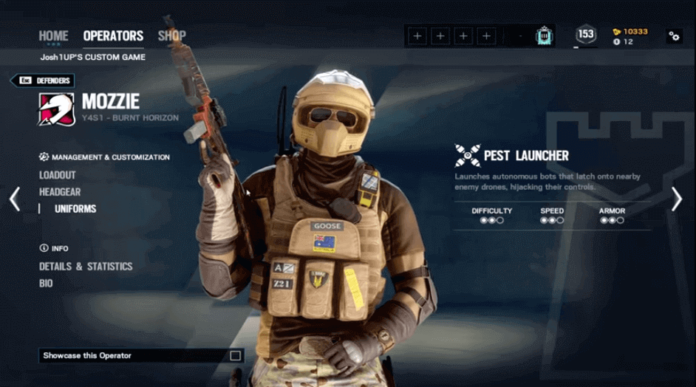 Rainbow Six Siege has one of its new-age operators who happen to be the toughest defender kits of the game. It is Mozzie. Along with Gridlock and the Outback map, Operation Burnt Horizon gave birth to the Australian operator, Mozzie.

Mozzie’s kit includes several things to grab your attention. Some of them include primary gadgets, weapon options, and C4. All these components have led him to be the toughest operator at any stage of this game.

So to help you with Mozzie, you can use the Rainbow Six Siege Cheats that will cite the most important points to get you most out of the kit. So let’s get started.

Guess what Mozzie’s gadget is. A Pest launcher. Yes, you read it right. When armed, Mozzie fires spider-like mechanical devices known as Pests from a slingshot. Any attacker drones that enter their area of effect are taken control of by these Pest gadgets.

When attacking drones are in danger of being taken over by a Pest, they will receive a warning. Pests can’t move once they’ve been launched, but they can be picked up and re-fired.

When a Pest controls an attacker’s drone, the drone becomes Mozzie’s property, and the pest vanishes. One drone is looked after by one pest.

Mozzie is equipped with two amazing primary weapons. They are the P10 Roni and the Commando 9, the latter being the popular choice.

The weapon’s medium rate of fire isn’t optimal, but it delivers a punch and has an angled grip. It’s more than viable in the right hands. A 1.0x scope of your choice and an angled grip for faster aim-down sights are recommended accessories. (ADS).

Some cheats to get the most out of Mozzie

The Roni produces substantially less damage, yet it fires at a blistering tempo and has remarkably manageable recoil.

The Roni is a headshot machine, thanks to those numbers and the popular 1.5x scope. Use the extended barrel attachment to boost damage at longer distances for the best results. Use the compensator if recoil is a concern.

Don’t use up the pests in the beginning rounds

If you do so, you will most likely come across a drone and be helpless to control it. You will face it when you haven’t come across any drone and forget to pick up the pest.

The best method is to keep at least one pest in your bucket while you are still midway through your match.

Barbed wire is a boon

Barbed wire is an excellent technique to weave a spider’s web against opposing drones, as well as a good means to hide your already hijacked machines in plain sight.

When playing as Mozzie, barbed wire is your greatest buddy because you can hide your kidnapped drones inside clusters of the tool while simultaneously using it as a trap to capture even more.

A little triangular warning appears on the screen of an attacking drone when it gets too close to one of Mozzie’s pests. Most players will not respond in time and will fall under your control anyhow.

Switch up your loadout

To make Mozzie as useful as possible, adjust his loadout before the start of a match. The default loadout isn’t bad, but it’s important to make sure you add accessories to your guns.

We recommend trying out both of Mozzie’s primary weapons to determine which one you prefer to play with and use.

The versatility of Mozzie is always looked up to. It’s a reasonable strategy to save all of your pests for yourself while on the move. It’s also possible to set up your pests during the setup phase and anchor the bomb spot.

Mozzie’s style of play is difficult to categorize into a single role. With a C4 for plant denial, he works effectively as an anchor.

He’s also quick and has powerful weapons, allowing him to roam if necessary. Realistically, the player’s playstyle is up to them, and the rest of the team’s needs must be met.

Hopefully you get the most out of Mozzie’s kit with these tips and tricks. Is there anything you follow to do the same? If yes, make sure to leave a comment below.

How will the Casino Industry Adopt Technology to Beat Covid?