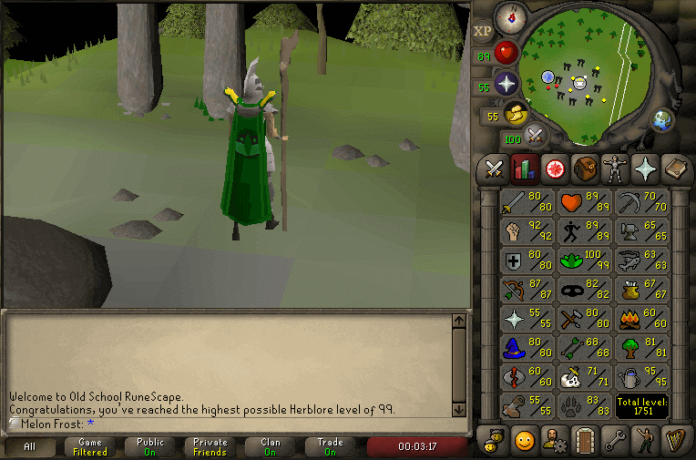 How to get to 99 Herblore and gain a fortune too

Herblore lets players clean herbs, make tar, and brew potions. While on paper these don’t seem like much, potions support any combat-heavy activity. Without clean herbs, you can’t brew them. As for tar, they’re the ammunition for Salamanders, a good weapon with a variety of uses. It’s classified as a ‘buyable’ skill, which means that you need a significant OSRS gold investment to level it up. That also means it can be hard to profit with it, though there are viable ways.

You unlock the skill after completing the quest ‘Druidic Ritual’. It’s a shot and simple quest and it gives you enough XP to get the skill to level 3 off the bat. You must be a member to complete this quest.

Wearing an Amulet of Chemistry can lower your potion making cost. It gives you a chance to add an extra dose to the potions you make. It’s only recommended for the more expensive potions, as the effects are diminished on cheaper ones.

You can also use Botanical Pies to boost your levels and access yet unavailable recipes at the lower level.

Lastly, there are many recommended paths and methods you can take, but you can always make your own. You can even switch between high profit or high experience methods at your leisure.

Again there are three ways to level up Herblore. That is cleaning up herbs, brewing potions, and making tar. We’ll be classifying them according to level up speed and profitability.

Making potions is the fastest way to 99 Herblore. Just stock up on the required ingredients and you’re good to go. The fastest way is to get your reagents from the Grand Exchange, but for some, that could be quite expensive. Spending all that OSRS gold buying all kinds of reagents can be a turn off for some players. Of course, you can gather up the ingredients yourself as well, but it’ll take longer. In contrast, by doing so you also get 100% of the profits selling them.

You’ll actually lose a bit of OSRS selling potions you bought the ingredients for. It doesn’t help that the ones that give the most XP are also quite expensive. Moreover, selling those potions can lead to more loss than the cheaper potions.

Making tar is another possible method of leveling Herblore. It’s cheaper than potions and requires less clicking. Of course, it won’t be able to give the same rates as potions. There are only four kinds of tar you can make, and the highest one is level 44. The highest level potion you can make is at level 98. Estimated experience rates for that potion is almost 3 times that of the tar.

Anyway, this method is way cheaper than making potions, and you’ll lose less than if you brew and sell potions. Since the rates are lower it’ll also take you longer to reach 99, but it’s less of a burden on your wallet.

If you’re going for this method, stock up on swamp tar beforehand. The GE limits buying it to 13,000 at a time, which isn’t enough for anything long term. A generous estimate says it would take only half an hour before it runs out.

Cleaning herbs can be tedious, but it offers the most in terms of OSRS gold. With the Porcine of Interest update, cleaning one kickstarts a process that cleans the rest of the herbs in your inventory. That’s pretty much all you do for this method.

Higher-level herbs give more XP, though they’re not necessarily the most profitable herbs to clean. Unless you’re willing to put in the time, it’s also not recommended to keep on cleaning herbs from 3-99.

Alternative Methods of Profiting through Herblore

You can also make Divine Potions to sell. Turning the basic potions into divine ones boost up their value in the GE. Of course, you’ll need Crystal Shards to make Crystal Dust, and they’re not tradeable. To get these crystals, you need to complete the quest ‘Song of the Elves’, first. Making Divine Super Combat Potions are the most profitable, letting you earn up to 15 million OSRS gold selling per hour. However, you’ll be limited to your supply of Crystal Shards or Dust you have on hand.

Herblore, because of its buyable nature, makes it hard to level without having capital. Ironmen will have to spend time gathering and acquiring ingredients first before leveling up the skill. There are different guides for Ironmen, who can’t rely on the GE to supply the ingredients. You can also do quests to gain XP for it, but it’ll never be enough to reach 99, or even the invisible 200M XP maximum.

Since you’ll be needing capital, it’s better to acquire money through other methods first. There are many other methods of obtaining wealth before you should level Herblore. That means this skill should be lower in your priority until you can afford to level it.

As always, it is in your hands to choose which methods to follow. You can even mix and match depending on the time and effort you can afford. You might even have to buy OSRS gold to bolster your capital! Whatever your method to level up Herblore, just keep at it and you’ll be 99 in no time. Good luck and have fun leveling Herblore in OSRS!

Happy gaming, hope you get your Herblore Cape soon!

Vivek Attri - January 30, 2019
0
Gone are those days when we used bulky landline phones to make national and International calls nowadays mobile phones have replaced them. With the...

What are the Benefits of Having an IT Certification?

Basic Concepts of VPN: How to Choose the Reliable Service

Buy Case Study Online to Take Up a GRADE Challenge